What Does A Live Event Producer Do?

There are few roles more important in event production than the role of a producer. They are responsible for so much, essentially planning and coordinating all event activities on behalf of their clients. 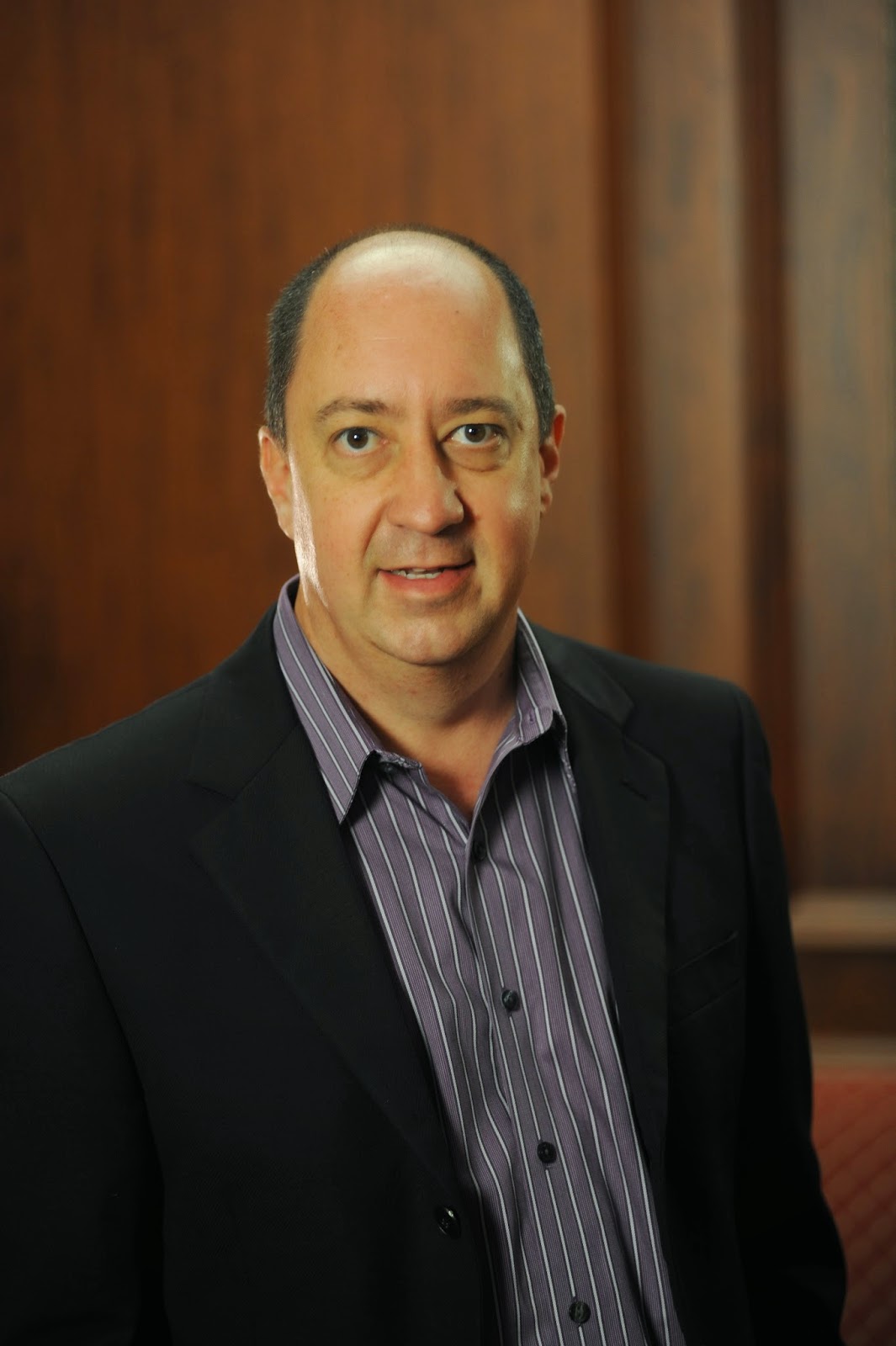 There are few roles more important in event production than the role of a producer.  They are responsible for so much, essentially planning and coordinating all event activities on behalf of their clients. From initial client meetings which determine plans and budgets to selecting the venue and personnel to run the event, the producer is involved every step of the way. We recently met up with Rob Jones, a free lance event producer, to learn more about his role and how he has pulled off event after event for the past 20 years!

Beginning his professional career with Walt Disney Entertainment, Rob has held technical, production and account management roles for a vast level of projects and clients. For projects to which Rob has contributed, he has earned 7 American Business Awards (Stevies), 3 Tellys and 2 nominations for Producer of The Year from Event Solutions.  He’s also had the honor of working on the 1996 Summer Olympics Production Team and Super Bowl XXXIX.

What is your role in live events?

I am currently a freelance producer, but I have certainly seen my fair share of all aspects of events. I have directed, stage-managed, and even worked as a tech. Experiencing all aspects of an event really helps me excel at my job as a producer.

What does a producer do?

A producer’s role includes many things, but at the end of the day, my job is to help bring my clients ideas to reality.

How much do you tell the client about all the effort behind the scenes?

It depends on how much detail the client wants. Show production has a lot of moving parts and there are a lot of things that go on behind the scenes that can be overwhelming or distracting to some clients. At the same time, I have some clients that really like to get into the details of how we create production schedules, show flows, and what really goes into pulling a production off.

In relation to show flows and cue sheets, at what point are you involved? 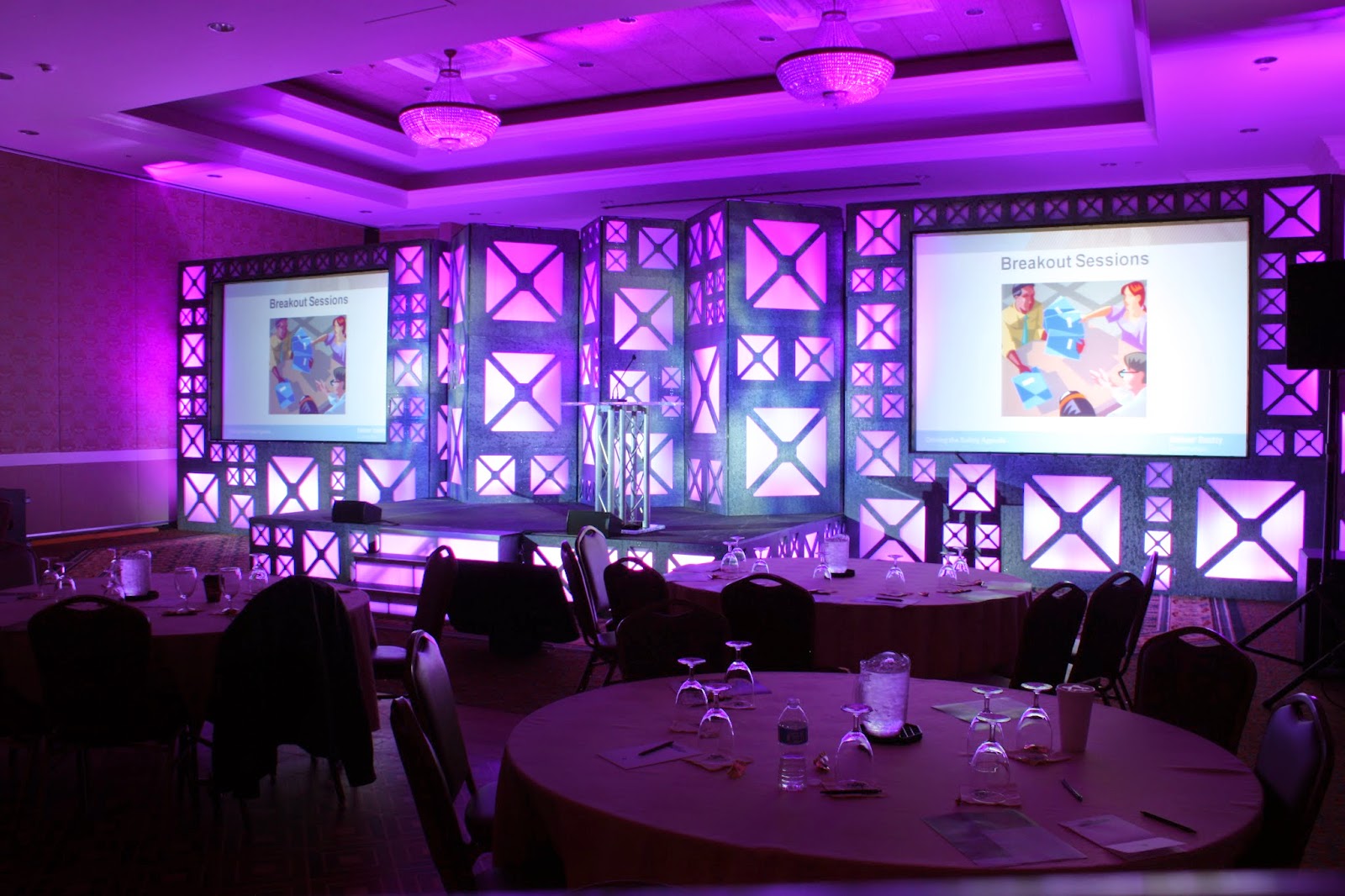 I would say that 90% of the time the client gives me an agenda and I then have to convert that into something the production team can interact with… what we in the industry call a production cue sheet, show flow, cue2cue, etc. Sometimes translating that is simple – other times I have to keep the client more involved.  About 10% of the time, I get a working production cue sheet or agenda that I just refine a little for my team. At the end of the day, what begins in the client’s mind as a flow of the show must be converted into something that the production team can easily understand and accurately represents their roles for each and every cue. That’s why cue sheets are so very important.

What is your relationship with the stage manager – who owns and calls the cue sheet?

As a producer, it’s my responsibility to communicate the client’s goals into something my production team can understand, and that includes the stage manager. I always try to hand off the reigns of the cue sheet to my stage manager once we get on site. There are many changes that happen in rehearsals and it’s challenging for me to be in all places at the same time. The stage manger always becomes the final owner and editor of the cue sheet because they manage rehearsing with clients on stage and later responsible to call the cues for the rest of the crew. If edits to the cue sheet always had to wait for my hands to type them… it could be a detriment to the production team and show.

How likely are changes to the cue sheet and is that frustrating? 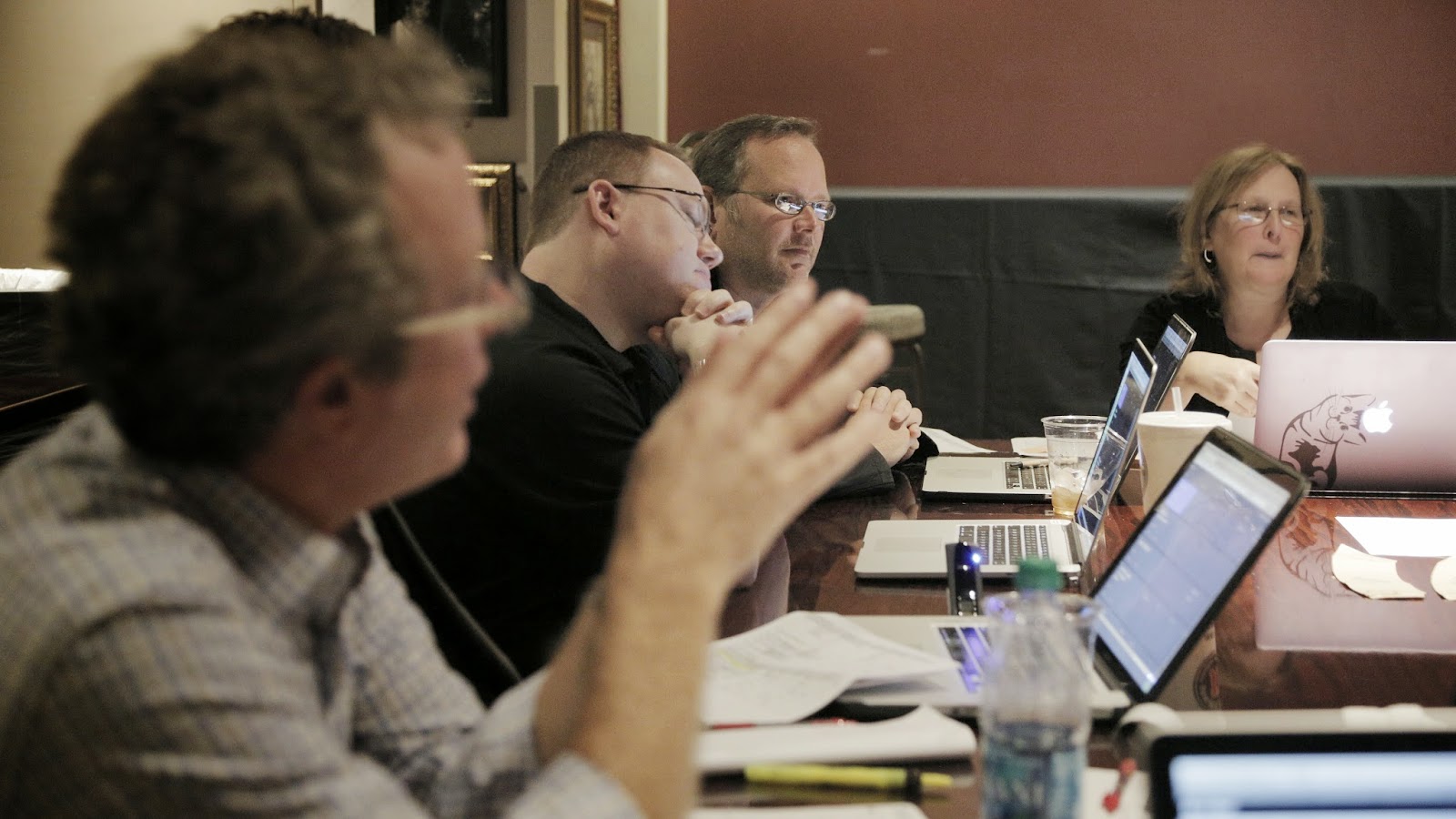 Its live event production, so if you’re not ready to handle changes you’re in the wrong business! Changes are a guarantee, it’s more about which work flows and team you have in place to handle the changes. Ideally, I’m the primary point of contact and then I delegate who will own particular aspects of the event.  This includes the changes to production agendas, schedules and cue sheets.

How do you put these changes into effect on site?

Ideally I’m speaking directly to my team and they then own the changes as needed. Email is certainly involved and even text messaging. But the difficulty with emails is they stack up behind the actual speed of changes that come from offline rehearsals, main rehearsals and even during show. The problem again is that I can’t be everywhere at the same time therefore causing communication challenges at times.

How do you handle versions of schedules and cue sheets currently?

Typically I version stamp them and place that info in the footer of my docs. This can be tricky, because all my crew will be given version XYZ of the cue sheet but as soon as they start rehearsing the changes come rolling in. We almost always run into the issue of some crew members having the wrong version of a cue sheet in front of them, which can lead to confusion.

How many versions do you typically end up at the end of a show?

The larger shows can have numerous versions. It can be up to 20 primary versions, each with their respective sub versions in-between. My inbox is usually flooded with emails with new versions attached so I have to choose the most recent. It gets particularly tricky if it’s a multi day event because you end up with morning and afternoon shows, and even more so if you have unique rooms with their own version history. 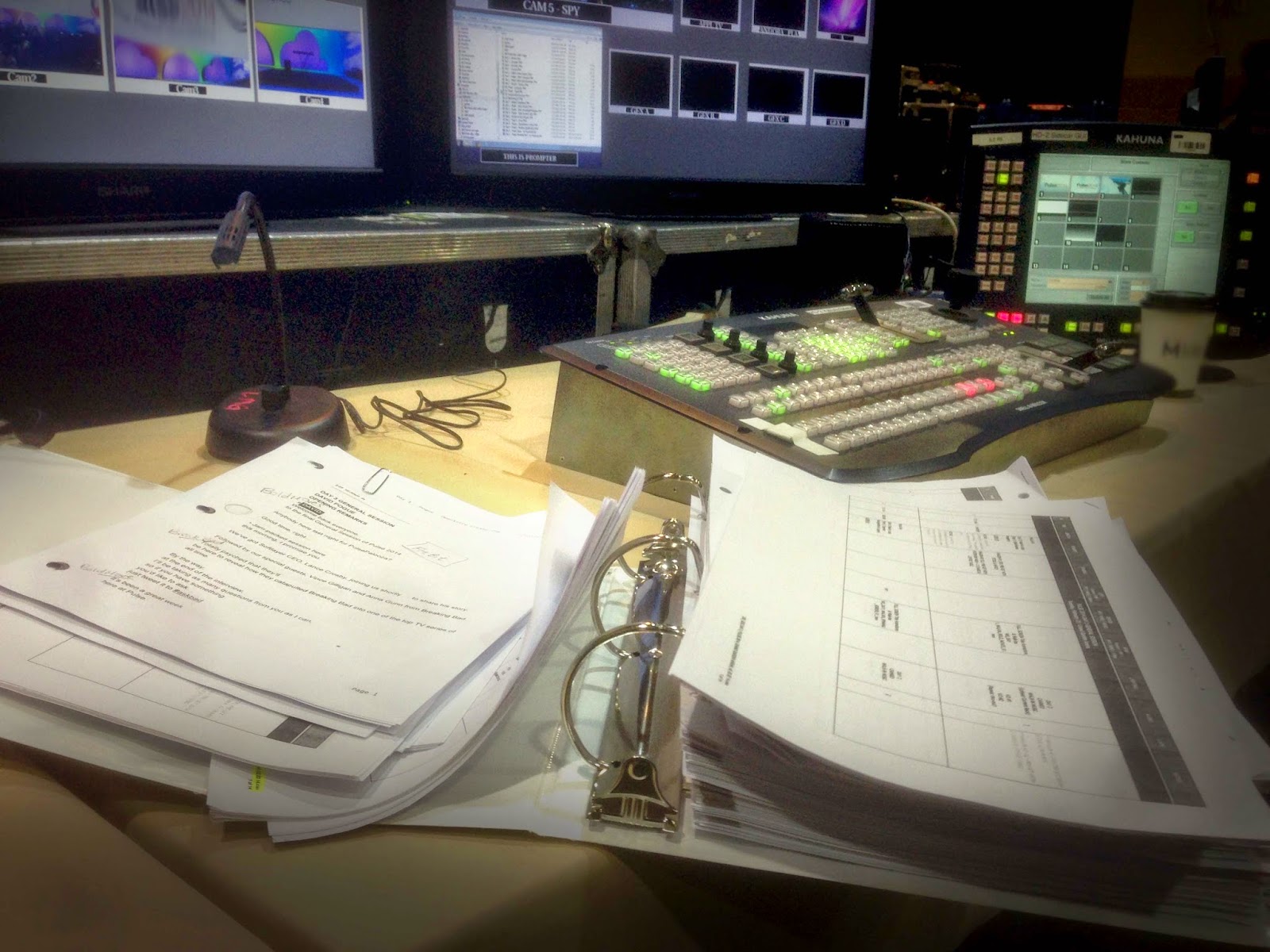 How much printing do you typically see while on site?
We always do hard copies and its a good practice, but yes… there’s also a lot of paper waste. Ideally these documents would be updated in real time. During rehearsals and show, it would be great if the stage manager could be making changes on the fly and the rest of the crew got to see those edits instantly. This is of course where your Shoflo platform really becomes valuable to the production process.

What happens when shows don’t go according to plan?

It does happen occasionally.  But you have to maintain momentum, engagement and keep calm. You trust your team that you have in place – they are professionals and can make quick calls to bounce back and get on track again. It does get difficult when a show goes so far off “paper” that the cue sheet becomes useless. But to be able to make changes on the fly and maintain the “holy grail” value of a production cue sheet is essential in situations like that.

What is the value of rehearsals?

It’s my job to be planning and thinking through as many details as possible in the pre-production process, but on-stage rehearsals is when you really get to see and make valuable adjustments. If things get headed in the wrong direction you have the opportunity to get them back on track. But again, its all about the team and tools that help you respond well and quickly.

When do you typically start inviting crew or department heads into the event planning process?

For key department heads, I try to bring them in at least 30 days out when possible.  I typically have a good idea of the show structure and I can plan ahead on any needs from vendors. Within 1-2 weeks I bring the remaining crew into the production schedule, go over times of events and cues, accommodations, travel, etc.

What keeps you in the live event industry?

Haha, I didn’t really plan on getting into this industry. I was an audio engineer and musician looking to be in a recording studio. In the late 80’s I joined Disney Entertainment doing live events and just got hooked I guess.  I’ve never looked back with any regrets.  I love what I do.

What changes to overall production process would you love to see?

I mean, getting info from our clients sooner would always be ideal, but more often, events aren’t their full time jobs. You have to understand where they’re coming from and the show must go on.  Therefore translating documents more easily from the client to to my production team is a necessity.

What would be one thing that we at Shoflo could do that would be helpful?
I guess if you could take my client’s information and magically convert it to a Shoflo automatically that would be great. You guys are definitely on the right track though. You have made communication and management of cue sheets real time, both leading up to and on show site.  So that removes some big bottlenecks around communication, which is a huge help for sure.

How were you exposed to Shoflo?

I recently worked with a Stage Manager who was moving their cue sheet into Shoflo.  I loved being able to input and push changes to crew instantly, and being able to view it on my phone, tablet and computer was big. It was fun to watch the whole crew as they tracked the Stage Manager from cue to cue during the rehearsals and show. We definitely used the print to PDF as a backup before shows and that’s huge that you guys have that. When it was all over, the show ran smoothly and was very successful.

Thanks to Rob Jones for taking the time for this interview. Check out Rob’s Linkedin.

To see why Rob Jones continues to use Shoflo to make his events run better, click here.

Rob graduated from Millikin University with a Degree in Commercial Music.

When he isn’t traveling or working long hours, he enjoys salt water fishing, writing his wine blog and cooking creative dishes to complement those wines.

How to Look Better On Camera: 11 Simple Steps

Are you unhappy with how pictures of you have been coming out lately? Learn how to look better on camera…
CONTINUE READING

From live streaming virtual events, to game scripting, and even in-person events, having a planned and detailed schedule is the…
CONTINUE READING

The Best Live Streaming Equipment for Every Budget

The Ultimate Guide to Planning a Webinar

Whether you are promoting your brand, giving educational resources, hosting an event, or simply having an all-hands meeting for your…
CONTINUE READING

3 Ways to Generate and Convert New Leads With Video

Video is often overlooked in the digital marketing world. Creating videos and live streaming is a highly effective way to…
CONTINUE READING

How to Coordinate the Production of a Virtual Church Service

Virtual church services have existed for a while, but the pandemic has made them skyrocket. Learn how you coordinate the…
CONTINUE READING